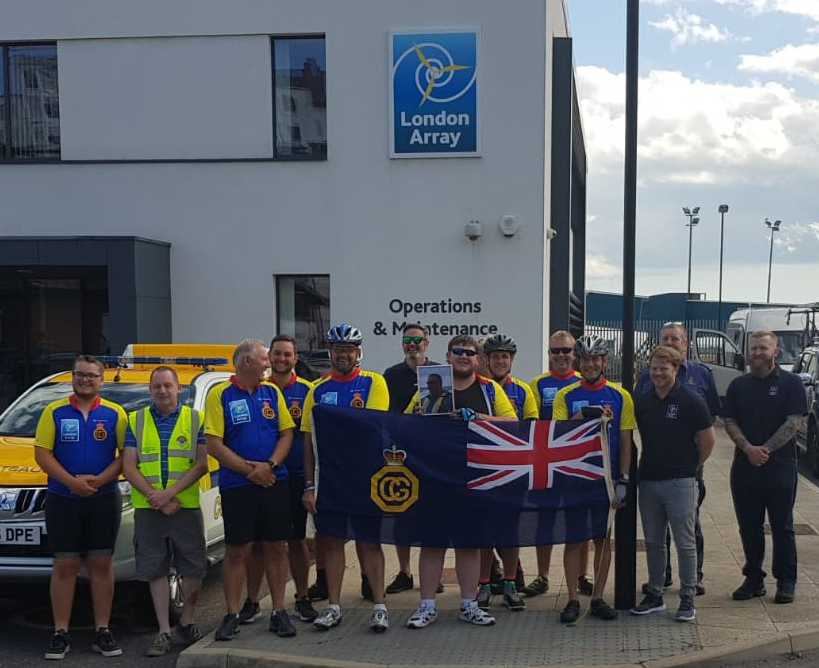 A valued member of the London Array team has been celebrated with a memorial cycle ride that raised more than £1,000 for charity.

Gordon Sinclair, who was a Marine Coordinator at London Array, passed away in early 2019. At the end of the summer holidays more than 20 members of Coastguard units from across Kent – including many London Array staff – took part in the cycle ride. Starting at Herne Bay Coastguard Station, the ride covered approximately 160 miles and visited a number of stations over two days. Other wind farm employees got involved by helping to staff support vehicles which followed the cyclists.

Marine Coordinator Mark Gambrill explained: “Gordon was a close colleague who is much missed as part of the London Array team. As he was also a volunteer with the Coastguard Association, we decided to arrange a memorial cycle ride to raise funds for the organisation in his memory.”

“There were one or two minor injuries along the way but a hardcore few of us managed the journey in its entirety and we are all pleased to have done our bit to honour Gordon and raise funds for this important cause.”

The Coastguard Rescue Service is a voluntary service that is reliant on donations. Money raised in memory of Gordon Sinclair will be put towards helping current and retired members of the Coastguard in times of hardship.

To find out more about the Coastguard, click here. Or to donate in memory of Gordon Sinclair, visit the Go Fund Me page.

Menu
This website uses cookies to improve your experience. If you continue to use this site, you agree with it.
Ok